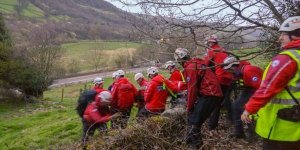 At 17:58 on Saturday 23rd March Calder Valley Search & Rescue Team received a request from Yorkshire Ambulance Service to assist with evacuating an injured man who had fallen and sustained a head injury in Brearley Woods.

18 CVSRT members were available to respond immediately and deployed in team vehicles or directly to the incident.

The casualty was assessed and treated by YAS Paramedics and a CVSRT Paramedic, before being immobilised in a vacuum mattress and evacuated by stretcher to an awaiting ambulance on Burnley Road. 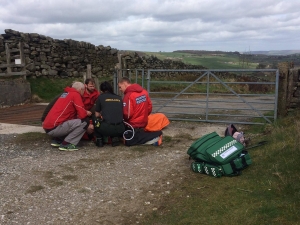 At 12:08 on Saturday 23 March Calder Valley Search & Rescue Team received a request from Yorkshire Ambulance Service to assist with the treatment and evacuation of a walker who had slipped on the path leading up to Bronte Falls and sustained an injury to their ankle.

20 CVSRT members were available to respond immediately and deployed in team vehicles or directly to the incident near to Stanbury, due to the remote nature of the casualties location the Yorkshire Air Ambulance (YAA) was also requested to attend.

With the advantage of flight the YAA arrived on scene first and began medical treatment of the casualty and her obviously broken ankle, within a few minutes the first CVSRT members were arriving on scene.

Being qualified Mountain Rescue Medics the YAA crew then handed over treatment of the patient enabling them to head to other taskings they were being requested to. The CVSRT medics used a shelter to keep the casualty warm, provided pain relief, splinted the injured ankle and kept her comfy whilst the rest of the team and an NHS ambulance arrived.

Once the Ambulance was on scene the medics handed the patient over to the attending crew and CVSRT members assisted with transferring her into the Ambulance for onward travel to hospital. 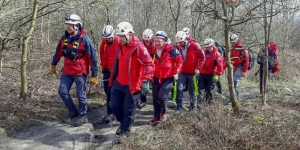 At 11:18 on Friday 22nd March Calder Valley Search & Rescue Team received a request from Yorkshire Ambulance Service (YAS) to assist with the location and evacuation of a horse rider who had sustained a suspected head injury.

Fifteen CVSRT members were available to respond immediately and deployed in team vehicles or directly to the incident near Bingley St Ives.

First on scene was a CVSRT Paramedic, who assessed the casualty and provided medical care, assisted by a further team member, until a YAS Paramedic crew arrived. The casualty was then transferred to, and immobilised on a spinal board and kept warm under a ‘cas shelter’.

Once additional CVSRT resources arrived on scene the casualty was moved onto a stretcher using a vacuum mattress and evacuated to an ambulance for onward transport to hospital. West Yorkshire Police assisted safe transfer of the casualty into the ambulance by temporarily closing the road.

Following stand-down of the incident team members returned home or to their place of work to continue their day. 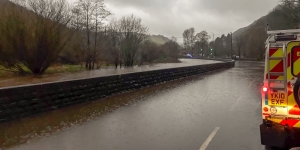 Following a period of persistent heavy rain which saw 59.44mm of rain fall in 24hrs Calder Valley Search & Rescue Team made assets available. Two CVSRT vehicles crewed by seven Swiftwater Rescue Technicians (SRT’s) patrolled the valley and were on standby to assist the other agencies involved. 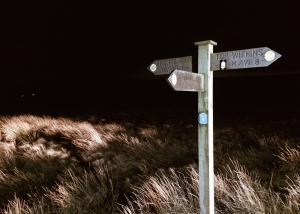 At 17:44 on Thursday 7th March Calder Valley Search & Rescue Team received a request from West Yorkshire Police, who had received a 999 call, to locate and evacuate two walkers who were lost due to being overcome by darkness near Alcomden Stones, Stanbury Moor.

Phone Find, an app which sends a message to the missing persons’ phone asking for its location, was used successfully and a partial team response of 12 was mobilised to assist the, cold but uninjured, walkers.

The walkers were quickly located, provided with extra warm layers to wear and walked off the hill to team vehicles. Following a welcome hot drink West Yorkshire Police returned them safely to their nearby holiday cottage.

Following stand-down of the incident team members returned to the Rescue Post to wash vehicles, sort and repack kit before heading home to continue their evenings.