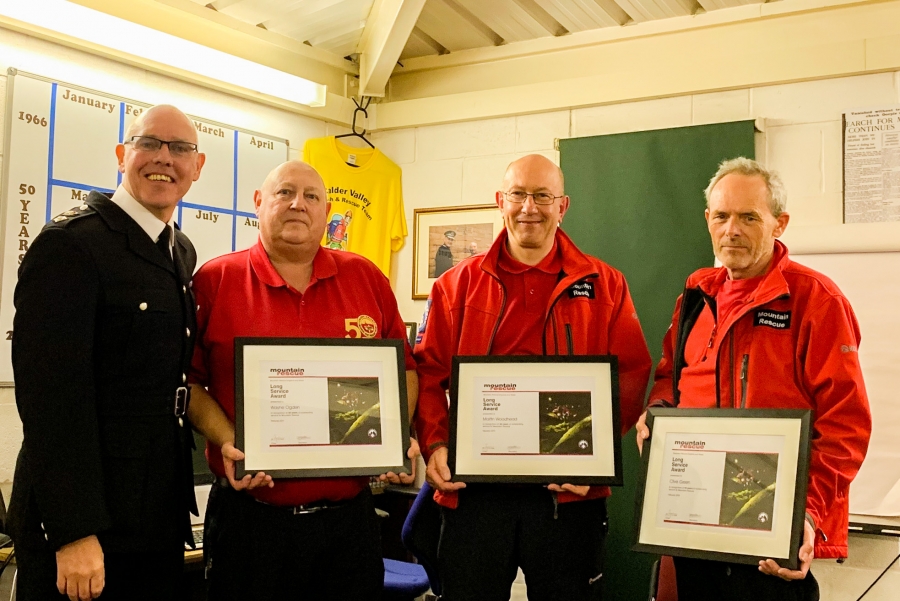 CVSRT Long Service Awards go to three of our finest

The awards were recognition for three stalwarts of the team who are always there helping to provide stability and continuity. It’s to their credit that after decades of service they are all still active, attend callouts and continue to make a positive contribution to the team. All three are excellent ambassadors for the team and the wider Mountain Rescue family.

Chief Superintendent Whitehead said “I am truly inspired by the recipients of the awards and the team as a whole. CVSRT are exemplars of public service and consummate professionals in their approach and delivery.”

Clive Green has volunteered 50 years of service to CVSRT and is the longest serving member of the team EVER, joining not long after its formation in 1966. As ‘buildings officer’ Clive played a major role in the project to construct the Rescue Post, our team base in Mytholmroyd, which was built 25 years ago. He also fulfilled the role of ‘assistant leader’ for five years until 2018.

Wayne and Martin have both volunteered 40 years of service to CVSRT, only three other team members have reached this landmark.

CVSRT would like to thank Clive, Wayne and Martin for their commitment to the team and being instrumental in its development over the decades. The experience they bring to the team is second to none.