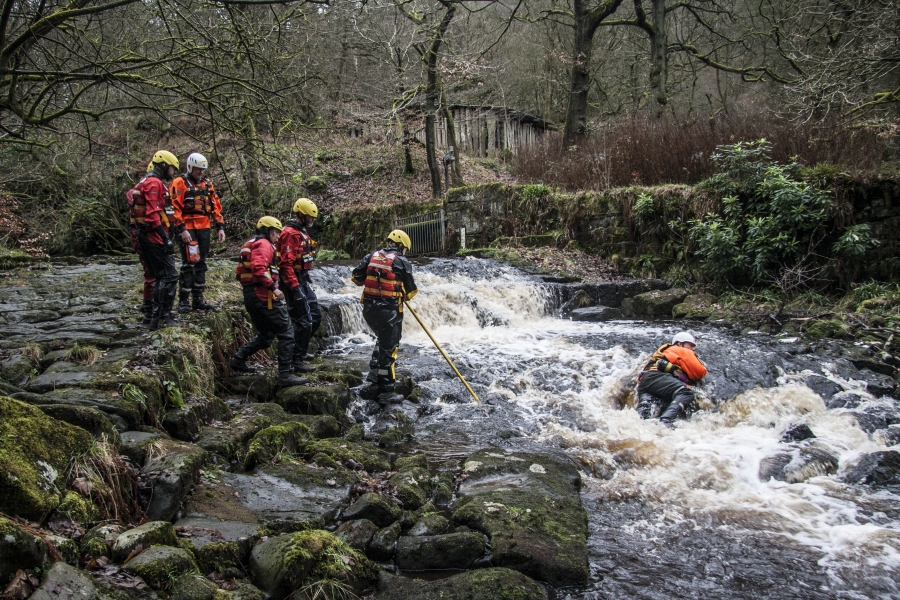 On Friday 25th January we reported to the Rescue Post at 1830. The next 20 hours were to be the culmination of the past year of training, and our past six months on the call out list. In total we’d accrued 472 hours of training, 718 hours attending events and 200 hours attending callouts – the equivalent of six 37 hour working weeks each.

To secure our place on the training programme we’d already faced a three step selection process which included a hill assessment, and a trip to Croagh Patrick to demonstrate we were ready to respond to callouts as probationary team members for the 6-months preceding this, our final assessment. The last step to becoming full team members.

With a range of mentors on site to assess our capability, we would take it in turns performing each specific role within a ‘fell party’ responding to several Mountain Rescue scenarios during Friday night and through Saturday. But what would the scenarios be? Despite several team members knowing what was in store not one of them had given anything away, so we had no idea what to expect.

Our first task was to pack the ‘fell party kit’, which contains standard items for those first on scene to protect, assess and provide basic treatment to a casualty, into our personal rucsacs. Next we were assigned our roles for the first scenario. A fell party consists of a ‘fell party leader (FPL)’, ‘second-in-command (2IC)’, ‘navigator’, ‘medic’ and ‘casualty safety’.

The FPL, whose role is it to lead, was briefed, and we were then dropped off, near Penistone Hill Country Park, the start point for our first scenario. Our instruction was to carry out a rapid path search to locate a missing fell runner. We had been informed of their route, which took in some of the Bronte Way and Pennine Way.

A quick radio check with control by the 2IC, we were to use the call sign of Calder 1.0, and then we were off into the darkness and drizzle. It was the navigator’s job to keep us on the route. We were soon descending to Bronte Falls, a hot-spot for real call-outs, where trips and falls often result in lower leg injuries. It was here we located our missing fell runner (guess what she had a lower leg injury!), the inclement weather arrived, and the assessment really began.

The FPL became the ‘casualty site manager’, while 2IC radioed control to provide a grid reference and assume the call sign of ‘Calder Exercise Charlie 1.0’. The ‘medic’, assisted by ‘casualty safety’ protected the casualty from the elements using an emergency shelter, karrimat, spare warm layers, warm cas bag, then set about working through a primary survey to identify and deal with any life-threatening conditions. Another message to control to confirm the casualty’s injuries and request additional kit, which was brought to the site by additional team members.

Meanwhile the focus shifted to planning an evacuation route by the ‘navigator’. Once the casualty had their injured leg splinted, they were packaged and loaded onto the stretcher for a relatively short but steep carry to the waiting ‘ambulance’. Even with a fell party of 20, which allowed us to take turns carrying, it was a tough carry.

The end of the exercise was followed by a quick debrief, highlighting things that had gone well or could be improved upon. All good advice to apply during our second scenario, which was to locate a party of four missing walkers who were overdue at their overnight accommodation. Once we had been assigned our new roles we started a rapid path over Stanbury Moor, and Wadsworth Moor to the hamlet of Walshaw. The weather had set firm now. Wind, driving rain and low mist were our companions.

As we climbed up Dean Gate we finally spotted the five (not four!) missing walkers. We knew the drill - manage the casualty site, protect the casualties, undertake primary surveys, provide treatment, and communicate with control. All five walkers were suffering from mild hypothermia, and one of them also had an injured shoulder. Our evacuation plan, a kilometre walk off the hill, once the casualties had warmed up and taken on some fuel. On arrival at Walshaw, the exercise was declared over and we had a quick debrief. Another successful scenario under our belts.

The next scenario was designed to test our understanding of the principles of dealing with a potential crime scene, with some details not for sharing here. Once we’d left the scene we made our way to our accommodation for the night, an outbuilding at Gibson Mill and enjoyed some hot food before getting our heads down for a few hours of well-earned sleep.

Saturday morning brought something we weren’t expecting, a learning session (with an element of assessment) around Water Awareness, a team core skill. Once suited and booted in full PPE we practiced bank-based and shallow water rescue using ‘reaching, throwing and wading’, with basic swimming and self-rescue. Just as we were getting the hang of using throw lines we were called to rescue someone stuck in the water. A chance to put into practice some of the principles and skills we’d just learned. Another successful scenario, which happened to be our last one.  All that was left to be done was to return to base strip down all our kit down, re pack the vehicles ready for a real callout, and have a final debrief.

Thankfully we all passed our final assessment and qualified as full team members. For us, this is just the beginning. Though full team members now, we’ve only just started learning what it really means to be part of the mountain rescue family at CVSRT.

Thanks to everyone at CVSRT who have made it a brilliant year - it was easy to learn in such a supportive environment and best wishes to the 2019-20 trainees who have just started their training.  Finally, CVSRT would like to thank the National Trust, Yorkshire Water and Walshaw Estate for use of their land/facilities, and those who volunteered to be casualties.