Search dogs have been a part of CVSRT since 1977 and over the years we have seen 15 dogs and 10 handlers assisting the team on searches.

Currently, we are very fortunate to have four air scenting search dogs and handlers within the team. All of the dogs and handlers are SARDA graded and on-call and ready to deploy within our own operational area, but also further afield when required.

Dog handlers are firstly Mountain Rescue team members but they provide an additional and valuable resource for the team when it comes to searching for missing persons. There are currently four graded, search dogs/handlers within CVSRT, out of thirty four in total in SARDA England. All four of the CVSRT dogs are border collies, which our handlers prefer for their intelligence, agility and durability.

SARDA is the Search And Rescue Dog Association (England) which is affiliated to Mountain Rescue, England and Wales.

To be considered for training as a dog handler, an individual must have been on the callout list of a recognised Mountain Rescue or Search & Rescue Team for a minimum of one year, have the support of their team, and have been a dogsbody (see below) on national and local training courses. SARDA’s aim is to teach the handler ‘how to train dogs to become search dogs’, and not to teach the handler search and rescue skills. They do not train the general public to become dog handlers.

It generally takes about two years to train a dog to callout standard and assessment takes place in winter conditions over three days in the Lake District, Snowdonia or Brecon.

More information can be found on the SARDA website at mountainrescuesearchdogsengland.org.uk

There was a short gap between Mike Haley and his dog retiring and Eric Spofforth and Brad grading, but otherwise, dogs have been in use by CVSRT since 1977.

Eric Spofforth with Brad, and Eleanor Sherwin with Bonnie were both awarded the Novice Shield. This shield is presented in recognition of the standard of their performance at initial assessment, for a first dog, and is awarded only in years when a suitable candidate present themselves.

Whilst there is an expectation that border collies will be able to work until they are about 12 years old, and labrador/retrievers a bit less, the possibility of illness or injury is ever present and numbers can reduce unexpectedly.

The Search And Rescue Dog Association was formed in Scotland in 1965. Hamish MacInnes, team leader of Glencoe Mountain Rescue Team had attended an International Red Cross Search Dog course in Switzerland where avalanche search dogs were being trained and assessed.

He saw the potential for using dogs to search for lost walkers and climbers within the UK and, on his return to the UK, Hamish started training his two German Shepherds, Rangi and Tiki.

In Dec 1964 a training course with Mountain Rescue members from throughout the UK was held in Glencoe. Encouraged by this course, and the potential shown by the dogs, a meeting was held in May 1965 and the Search and Rescue Dog Association (SARDA) was formed and initially covered the whole of the UK.

The National Search And Rescue Dog Association (NSARDA) was formed to represent the associations at a national level with other National Authorities.

Search dogs are trained to 'Air Scent' so, as a general rule, they do not track the missing person, but react to wind borne human scent.

When deployed skillfully by an experienced handler, the dog should find a person in its search area, as long as it is searching downwind of a casualty or items of clothing or belongings, which have human scent on them.

A dog can cover large areas of ground, including difficult terrain and woodland in the search and is very sensitive to any human scent it finds. It will immediately follow a scent to its source. It will then ‘indicate’ to its handler, usually by barking, to let them know it’s made a 'find'. It is not unusual for a dog to pick up a scent from a missing person, 500metres or more away.

It matters not whether it’s dark or very poor visibility, the dog can search just as well as if it were a clear day. However, if there is no wind or it is storm force, the human scent will not carry as far and the handler will compensate for this by shortening the sweeps of the area. This will take more time to search an area, but get a higher ‘Probability of Detection’ (POD).

There are no definite ‘POD’ figures for search dogs, however, of the dogsbodies deployed in assessments, in excess of 96% are found.

Dogsbodies are highly valued people in the development of the search dog. They go out on the hill and hide for the dogs to find on training and assessments courses.

From the very start of the dogs’ training, the dogsbodies are involved. When working with the puppies, dogsbodies help to get the dog socialised with strangers and encourage the dog to bark on command which, is how our dogs indicate that they have found a human or object bearing human scent.

Dogsbodies play an integral part in the search dogs’ training programme, regardless of weather conditions or the season. Their assistance and personal safety is paramount to SARDA so they are equipped with the best of kit and are well briefed.

New dogsbodies are always welcome and are mentored at first. They are encouraged to start with the young puppy dogs in their socialising stage. Then move on through the different training stages.

If you feel that you would like to be a dogsbody and you are over 18 years old, please contact CVSRT to find out when our next training session is. 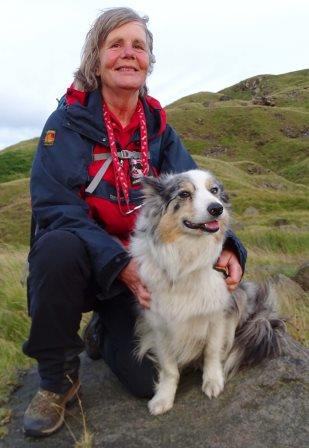 Ellie has been involved with SARDA England for more years than she cares to remember. Starting as a dogsbody in the 1980’s helping train other dogs and handlers, she decided to join the other side and graded Bonnie, her first dog in 1996. Bonnie and Ellie were awarded the Novice shield at their initial assessment. They then went on to find a missing casualty on the first call out a month after grading.

Her second and current dog Pepper graded in January 2008. Pepper has had two finds, one in 2014, when assisting Holme Valley MRT, and one on Helvellyn, assisting Lakeland MRTs in winter conditions, in January 2015.

Ellie has been a members rep for SARDA England, has twice been secretary, and is currently one of the training officers. 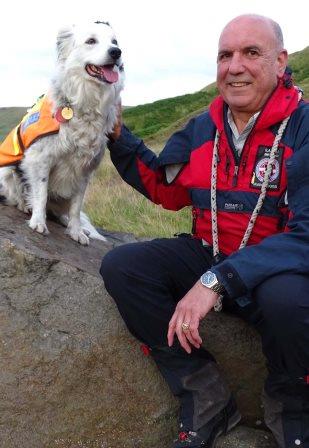 David’s involvement with SARDA started in 1994 when training his first graded dog, Sam, who retired after seeing a long service as a search dog. His second and current dog, Nell graded in March 2006 and will probably be ready for retirement within a couple of years. With this is mind David has acquired a new border collie pup, Wynn, whose training has started (October 2015) and it is hoped will achieve the required standard in 2017.

David was SARDA Chairman from 2005 to 2010 and has been Assistant Leader and Chairman of CVSRT. 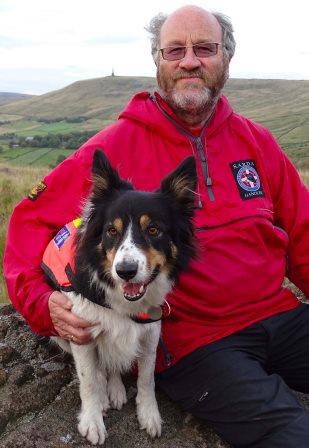 Pete joined the Calder Valley Search and Rescue Team in 1974 and has served in various roles over the years including a spell as team leader. He is currently team chairman.

Meg is Pete's fourth Border Collie, but the first to train as a search dog. She loves a daily swim in her local reservoir, which she credits with giving her such a clean and shiny coat!

Pete and Meg passed their assessment in January 2013. 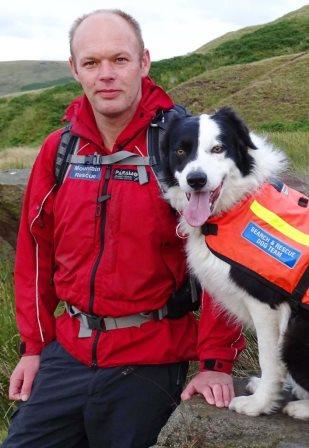 Dave has been a member of CVSRT since 2003 and was previously the fundraising officer for the team.

Dave started training Jack in December 2009 and they were graded in January 2013 alongside Pete and Meg.

Jack is a Border Collie who loves working for tennis balls and a cuddle from the dogsbody.